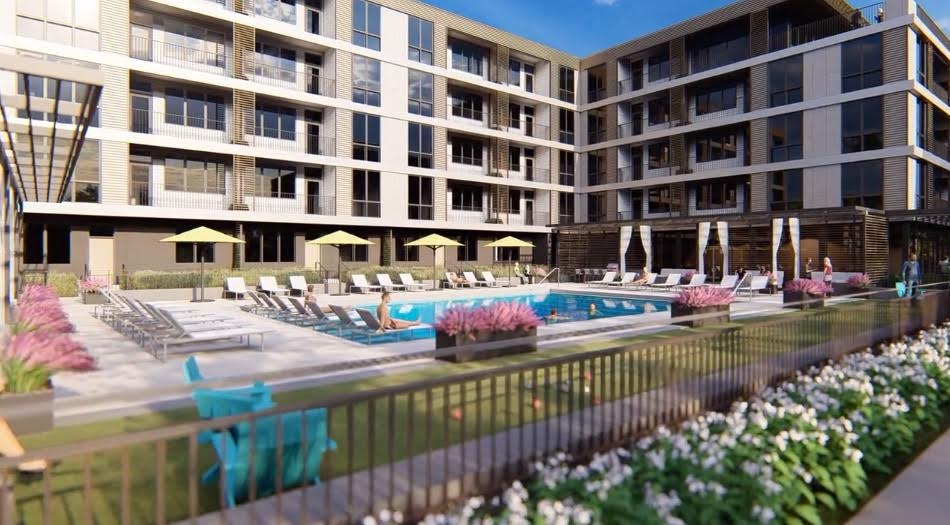 With the blessing of the city of Richmond and Henrico County, a North Carolina-based developer is moving ahead with a sizable project across from Rocketts Landing.

Zimmer Development Co. in recent weeks received approvals to rezone three CSX-owned parcels totaling 20 acres at the Richmond and Henrico County line, where it will build Fulton Yard, a mix of 535 apartments and 106,000 square feet of retail and office space.

The company is under contract to purchase the land from the Jacksonville, Florida-based railroad giant for an undisclosed amount.

Construction on the first phase is slated to begin during the first quarter of 2020, said Landon Zimmer, Fulton Yard project manager. It will start first on the 5-acre site at 201 Orleans St., which includes about 3 acres in the city and roughly 2 acres in Henrico, along with the train trestle that crosses the street above.

Phase one calls for a pair of five-story mixed-use buildings to rise along Orleans Street on the portion of the site that’s within city limits. Those would include a combined 3,200 square feet of ground-level retail and 108 apartments in each.

A third five-story building with 60 apartments, a pool, fitness center, leasing office and rooftop deck would be constructed on the Henrico County side of the Orleans site. An Uber and Lyft pickup area and electric car-charging stations also are planned for the apartment development.

As part of a proposed proffer agreement with Richmond, Zimmer plans to seek input from the city and neighborhood residents about how to improve the Orleans Street trestle. The firm has said it wants to install new lighting, art and covered walkways for pedestrians and bikers.

Other subsequent phases of Fulton Yard include a five-story, 20,000-square-foot office building that includes about 4,000 square feet of retail space on the ground floor fronting Nicholson Street in the city, Landon said.

Zimmer is planning a “parking park” on the long and slim portion of the 1.4-acre site at 25 Nicholson St. near Stone Brewing Co.’s manufacturing and distribution facility that will include landscaping and 68 parking spaces, according to site plans.

A portion of those 68 spaces would be dedicated as free parking for patrons of the Capital Trail and Pulse BRT, Landon said.

The largest component of Fulton Yard’s mixed-use community would be on nearly 14 acres just over the county line along Route 5. That phase would include 259 apartments, and about 80,000 square feet of office and retail space spread across three 5-story buildings.

In addition, there will be a mixed-use building with 15,000 square feet of ground-floor retail and four levels of residences above, and a five-story, 65,000-square-foot office building near Bickerstaff Road and Route 5.

The buildings would roughly form a perimeter around the 14-acre site, with access to the development via Old Ohio Street and Bickerstaff Road, Landon said.

A canoe and bike shed for apartment residents, along with a 12,000-square foot amenity center equipped with a pool, fitness center and clubhouse also are planned.

All three sites, which were long used as part of the rail yards, will undergo extensive environmental mitigation, Landon said.

While a general contractor for the project has not been secured, Richmond-based 3North is the architect and Timmons Group is the site engineer. Ann Neil Cosby and Kaci Easley with McGuireWoods handled Zimmer’s zoning application requests.

Zimmer has retained Robert Jones II of Icon Commercial and Connie Jordan Nielsen of Cushman & Wakefield | Thalhimer to market and lease up the retail portions of development.

The company’s rezoning applications involved getting city approval to change the Orleans Street site to B-5 Central Business District designation. Also, the Nicholson Street parcel will have B-7 zoning. The changes were made to allow a mix of commercial and residential uses.

The county approved the 14-acre site for an urban mixed-use designation, and part of the Orleans Street site is to be rezoned to R-6, which allows for multifamily development.