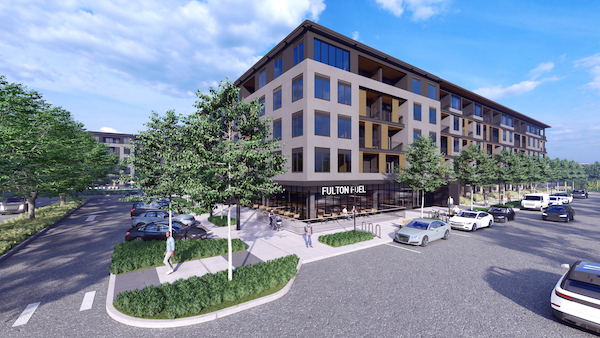 Nearly three years since its planning began, a major real estate development next to Rocketts Landing is set to get construction underway while another nearby is going vertical.

Zimmer Development Co. is preparing to break ground in the next several months on Fulton Yard, a mixed-use project on about 20 acres at 201 Orleans St., 25 Nicholson St. and an unaddressed parcel along Old Osborne Turnpike.

Spanning four buildings, the project will add 535 apartments and over 100,000 square feet of commercial space to the neighborhood.

The North Carolina-based developer has been planning Fulton Yard since 2019, including filing plans and getting the appropriate entitlements within four months.

It continued on schedule into 2020 when the company purchased the land for $5 million. Then the pandemic hit, and with it came delays.

“The pandemic slowed us down. We didn’t mind sitting on (the project) longer than we’d originally planned, but that’s how it goes,” said Landon Zimmer, Fulton Yard’s project manager. “We’re looking forward to developing that site.”

In late May or early June, Zimmer said, they’ll break ground on a pair of mixed-use buildings on Orleans Street. Those two buildings will bring over 200 apartments and 3,200 square feet of commercial space and be considered the first phase of Fulton Yard.

Zimmer said the next phases will break ground shortly after.

“We’re going to start pushing on the (Old Osborne Turnpike) tract. We’re looking to move forward on the remainder soon thereafter,” he said, referencing the 15-acre parcel to the south. That site will house the remainder of Fulton Yard’s apartments, as well as some retail space.

The last slice of the project will be at 25 Nicholson St., which Zimmer said will be all retail and office space.

3North is the project’s architect and North Carolina-based Evolve Cos. is its general contractor. Icon Commercial’s Robert Jones and Thalhimer’s Connie Jordan Nielsen have the listing for Fulton Yard’s commercial space.

Zimmer said he expects an 18-month buildout once construction begins, which would give Fulton Yard a late 2023 or early 2024 completion.

Meanwhile, the next phase of Rocketts Landing proper is well underway.

WVS Cos. and PRG Real Estate are going vertical on the Block 8 apartments in Rocketts Landing.

“Those are going to deliver at the end of the year,” Foster said.

Philadelphia-based PRG is a property management firm that’s also an equity partner in many of WVS’ developments.

Saunders + Crouse Architects is Block 8’s designer and KBS is its general contractor. Foster said their familiarity with both the site, WVS, and KBS allowed them to quickly go vertical.

“We already built like 300 apartments there. It makes it a lot easier when you’re doing the same deals with the same partners and contractors,” Foster said. “And we play nice with the city and don’t cause them any problems.”

Fulton Yard and Rocketts Landing both straddle the Richmond/Henrico border.

Foster said they have more in store for Rocketts Landing. To the immediate north of Block 8 is 4401 E. Main St., a roughly 1.8-acre site owned by an entity tied to WVS that Foster said will eventually be home to the Block 6 apartments.

“We’ll probably purchase the land in the next three to four months and break ground by the end of year,” he said. “It’ll be another couple hundred units.”