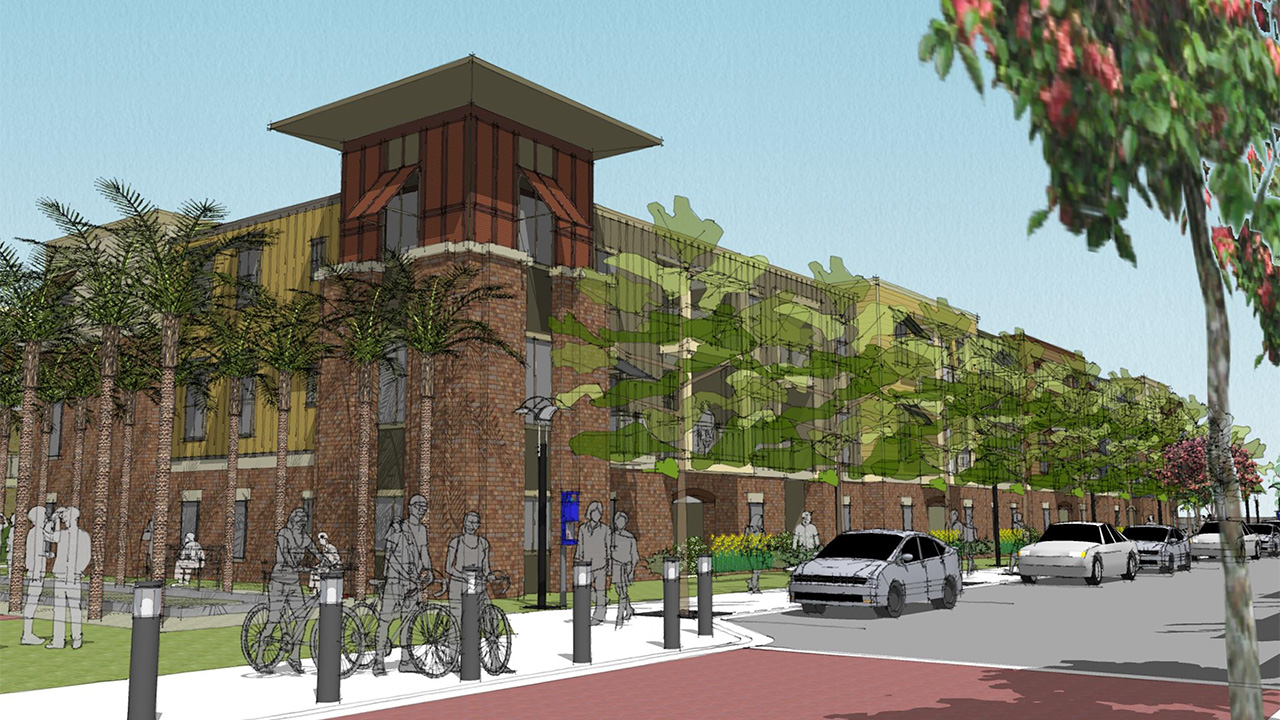 RESIDENTIAL – A cluster of new structures, known as Stadium Enclave, can be seen in a triangular wedge of land opposite of Doak Campbell Stadium against the backdrop of an ever evolving Gaines Street. Soon, there will be another.

Stadium Enclave is a 185-unit, 601-bedroom apartment complex of 10 new buildings mostly situated where an old cement plant used to be. Soon, it will be joined by 7 new buildings on approximately 12 acres across the-now quiet Mosley Street, that will contain another 161 apartment units with a total of 565 beds. The new development will be known as, “Mosley Place”.

According to Landon Zimmer, principal developer with Zimmer Development Company, “Demand for Stadium Enclave [has been strong] enough for us to proceed with Mosley Enclave in 2018.  We think that the demand is likely due to the value proposition of the development’s location, which is close to so many public parks and trails, yet juxtaposed by its proximity to Gaines Street.”

In order to proceed with the proposed Mosley Place, Zimmer Development worked diligently to acquire parcels of land one-by-one within the Stearns Mosley Community. During a January 31, 2018 City Commission Meeting, Assistant City Manager Wayne Tedder informed the City Commission that prior to submitting any paperwork to the City, Zimmer Development worked with the neighborhood [Stearns-Mosley Condominium Association, implied] and did a “nice job” to deliver a mutually beneficial solution to allow this project to move forward.

“Despite the recent and upcoming development and construction, we believe that we have been able to maintain the spirit of the neighborhood with help from the Stearns Street Condominium owners. According to code, we could have built five times the density within Mosley Enclave, but focused more on transitioning away from the surrounding mid-rise product and more towards a greener and more peaceful product. “

To move forward, Zimmer and the City of Tallahassee had to perform a land exchange impacting approximately 1.14 acres owned by the City of Tallahassee, a portion of which containing a 225-foot wide city electric transmission easement (proposed for reduction to a 100-foot wide easement) in exchange for right of way to be granted by Zimmer for improvements to Stearns Street, Moseley Street and South Bicycle Boulevard. Zimmer is also providing right of way for a Stearns Street extension as well as a Stormwater Easement to be grated by Zimmer to the City across the former CSX Railroad Parcel near the backside of the Lofts on Gaines Condominiums.

The agreement to authorize the negotiations and exchange of city land with Zimmer Development without competitive bidding was approved by the City Commission on a 3-0 vote, with Mayor Andrew Gillum and Commissioner Scott Maddox outside of the chambers.

Mosley Place will be a student-oriented development with an overall budget at approximately $50 Million. A City Square will be built in the middle of the project, which will contain a courtyard, a bocce court, large arbor features, as well as local art and sculptures. Stearns Street will be completely redesigned in order to save the four large specimen Live Oak trees that Stearns Street currently winds through. Additionally, a bioswale will be added to the east of Stearns Street and South of the project, in order to catch additional stormwater runoff and to remove silt and pollution.

Development amenities will include, an infinity edge pool overlooking a 20-foot wide big screen tv, which will feature movies, live college and professional sports games, as well as other live topical programs of interest. A palm allee in addition to a water runnel feature that flows through the courtyard and into a reflecting pool.  A Car-wash station, large and small dog parks, as well as an outdoor fitness facility that will tie into nearby parks and trails. Zimmer adds, “Instead of studying or relaxing inside, our tenants can choose from a courtyard with a soothing water feature, the City Square, or a number of pocket parks.”

Construction has already begun to clear the property of the existing improvements. The apartments are expected to be delivered by Summer of 2019.