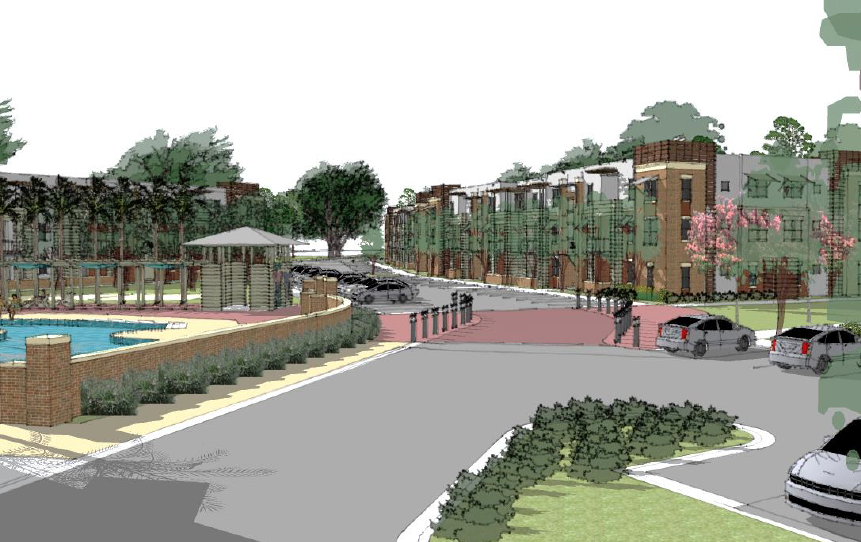 Negotiations lingered until the 11th hour but tenacious Sterns Mosley Community residents and the developer behind a $55-million student housing project both walked away amicably.

Everyone — the city, neighbors and developer Landon Zimmer — gave up something or made promises. The overall deal hinged upon the sale of a city-owned, 2.64-acre property on the west end of Mosley Street.

“For this part of our city, the urban infill nature of this project is exactly the kind of thing we want to achieve,” said Tallahassee Mayor Andrew Gillum.

Commissioners heard and agreed to several recommendations, including the city’s commitment to build a trailhead connection to St. Marks Trail since Zimmer is extending and paving an easement for that purpose. Trail access, a thorny issue for residents, was promised by city officials within a projected two-year timeline.

“I can promise you I am not going to slow down on making this happen and the sooner the better,” Commissioner Nancy Miller said. “This is the fastest way to get this done.”

Residents and Zimmer representatives met for months leading up to the commission meeting. Even as the item was discussed and delayed due to public hearings, negotiations continued outside commission chambers.

“It’s an unusual project. We were still working on it right into the commission meeting. When the public and private sector work together we can really come to a good agreement,” said Zimmer, who’s based in North Carolina. “I think everyone was reasonable here. We couldn’t have done it without the neighbors and the Stern Street Co-op.”

Jerrie Lindsey, a Sterns Mosley resident and member of the Sterns Street Working Group, said the terms appeared to please both sides. Paramount issues came down to compatibility with the eclectic area and supporting the trail extension. Zimmer also agreed to natural buffers in areas closest to the Sterns condos. During construction, the city will restrict right turns from Mosley Street to Sterns Street in order to ease traffic impact.

“They have mitigated some of the egregious impacts on our neighborhood and have provided us access to the bike trail that we would have been cut off from,” Lindsey said.

While terms with the developer are secured, some issues remain.

“We’re most concerned now with the city’s project to install a storm water drain that is even closer and much more impactful to our community than this development,” Lindsey said.

In other news, dozens of residents in the Rosehill subdivision in northeast Tallahassee vehemently opposed the city’s eminent domain pursuit of a substation on Meridian and Ox Bottom roads. In a split 3-2 vote, with Commissioners Scott Maddox and Curtis Richardson dissenting, eminent domain proceedings will continue. The city also can continue to negotiate terms with the homeowners.

Commissioners appeared to empathize with impassioned pleas made by residents to reconsider, including Rosehill resident Donald L. Tucker, former speaker of the Florida House of Representatives and U.S. Ambassador to the Dominican Republic. But city staffers said the substation was needed to supply electrical service to the area. A September deadline for the easement purchase looms.

“I feel compelled to follow what we do need to do at this time,” Commissioner Gil Ziffer said.

Tucker said Rosehill is a unique development with 500 acres, 94 lots and two lakes. Much of the land is common grounds and a home for wildlife. Surprised by the commission’s vote, Tucker said the city will have to file a declaration of taking and serve every property owner, who will all be defendants and have a chance to obtain an attorney.

While the issue is messy now, it could be worse. Tucker said many residents feel “misled” by the city, which obtained the substation site in 2003. Several alternative locations have been reviewed. But in a June 1 vote, Rosehill residents elected not to sell the current site for the substation use.

“They’ve never had a vote of the members of Rosehill on whether they wanted to sell the property until the first day of this month. And (the city) has been out there for 12 to 13 years,” Tucker said. “We’re not going to give them our land.”

Also during the meeting, the commission also approved: